Rightfully given a next-gen boost, the ‘Uncharted Legacy of Thieves Collection’ reignites a gamer’s love for the franchise’s treasure hunts, engaging puzzles and satisfying action

There is something about the Uncharted franchise that evokes a sense of thrill that very few other games do. While I craved a sense of the wild outdoors during the pandemic, the Uncharted games — from Uncharted: Drake’s Fortune (2007) to Uncharted: The Lost Legacy (2017) — made for a joyous virtual travel experience, replete with stunning worlds, gripping storylines and multi-dimensional characters.

(After all, there was a time in 2020 — thanks to PlayStation’s ‘Play At Home’ initiative during the early months of the pandemic — when the same collection was available for free!) If I wanted to rappel down a cliffside during a thunderstorm in the tropics, I turned to Uncharted 4: A Thief’s End (2016), and if I wanted to solve life-threatening puzzles in an underground Hoysala ruin in South India, I immersed myself in Uncharted: The Lost Legacy.

As gamers’ standards continue to evolve with the tech, a next-gen experience often pushes a re-examination of any title. Ideally, remasters should reflect the time during which they were first made and the technology for which the remaster was formulated. Nota bene: remasters are not remakes, so it is unrealistic to expect these games to be a complete overhaul.

So when Sony Interactive Entertainment and Naughty Dog announced a next-gen remaster of their bestselling Uncharted Legacy of Thieves collection (featuring Uncharted: A Thief’s End and Uncharted: The Lost Legacy), I was curious to see what difference the past few years would entail. Both games offer equal measures of drama, mystery and action, but what of gameplay?

I played these on a PlayStation 5 and a 4K television along with the Sony PS5 Pulse 3D headset to get the full impact of performance boosts, visual appeal and cinematic sound.

Welcome back, Chloe and Nathan

A classic to the core, A Thief’s End works well even as a standalone game and is the perfect segue into the world of all things Uncharted. The game is the culmination of all of Nathan Drake’s (Nolan North) endeavours through the years, from venturing into the wilds to find El Dorado and Sir Francis Drake’s coffin to his complicated relationships with journalist Elena Fisher, Lost Legacy’s Chloe Frazer (Claudia Black) and his brother Sam Drake (Troy Baker).

This particular game sees Nathan and Elena, married in domestic bliss; but Nathan is paid a visit by his long-lost brother Sam who needs his help to find the treasure of famed pirate Sir Henry Avery. The story spans several locations: Scotland, Madagascar, Italy and Panama all with their own environmental challenges.

Still from ‘Uncharted: Legacy of Thieves Collection’ games, for the PlayStation 5. Available from January 28, 2022. The screenshot shows Nadine Ross and Chloe Frazer exploring the giant Ganesh statues built during the Hoysala dynasty in ‘Uncharted: The Lost Legacy’

The Lost Legacy is certainly a fine addition to the franchise, following treasure hunter and thief-for-hire Chloe Frazer and former mercenary Nadine Ross (Laura Bailey) as they team up to find the Tusk of Ganesh in the ruins of the Hoysala Empire.

The two make their way through verdant jungles teeming with Asian elephants and Langur monkeys, fighting off rebels led by the tyrannical Asav (Usman Ally) who wants the Tusk for himself. Unlike A Thief’s End, Lost Legacy is set in a single location but there is a lot to reaped from the environment.

Given the games have many combat styles, playing the remaster on a PlayStation 5 sees faster loading time and responsive real-time gameplay – and no overheating or loud fan noises from an overactive console.

While both games are gorgeous on a PlayStation 4 or 4 Pro, these cinematic games are done further justice in the remaster, thanks to the PlayStation 5’s Custom Navi-based GPU which sees results in higher performance than a GPU with more compute units, but a lower clock speed. This means environments load faster and smoother right down to the minute detail as you explore the world.

With The Lost Legacy, for example, as I scaled the two ancient Ganesh statues, the details — cracks, overgrown roots and vines within the stone, subtle carvings — were more vivid. And the characters look much more detailed and their movements look more nuanced, courtesy of the graphics boost — could Nathan Drake be more handsome? Apparently so. Still from ‘Uncharted: Legacy of Thieves Collection’ games, for the PlayStation 5. Available from January 28, 2022. The screenshot shows Nathan Drake and Elena Fisher in ‘Uncharted: A Thief’s End’

During the cinematic cutscenes, the PS5’s proprietary 3D audio engine Tempest offered a lot of sonic immersion, from the landing punches during combat, to the rustling of foliage during stealthy prowling, to the satisfying sound of metal on rock when you are scaling a fragile cliffside, to the revving of your 4×4’s engine. Plus, Henry Jackman’s scores for both games are given their due with a surround sound experience.

Both games have an immersive off-roading experience; Ubisoft has invested a lot of physics here to create a realistic-stylised hybrid simulation so that you, as the gamer, enjoy the environment as well as the vehicle. A lot of this reflects in the controller experience which you would not get with the DualShock for the PS4 or PS4 Pro. 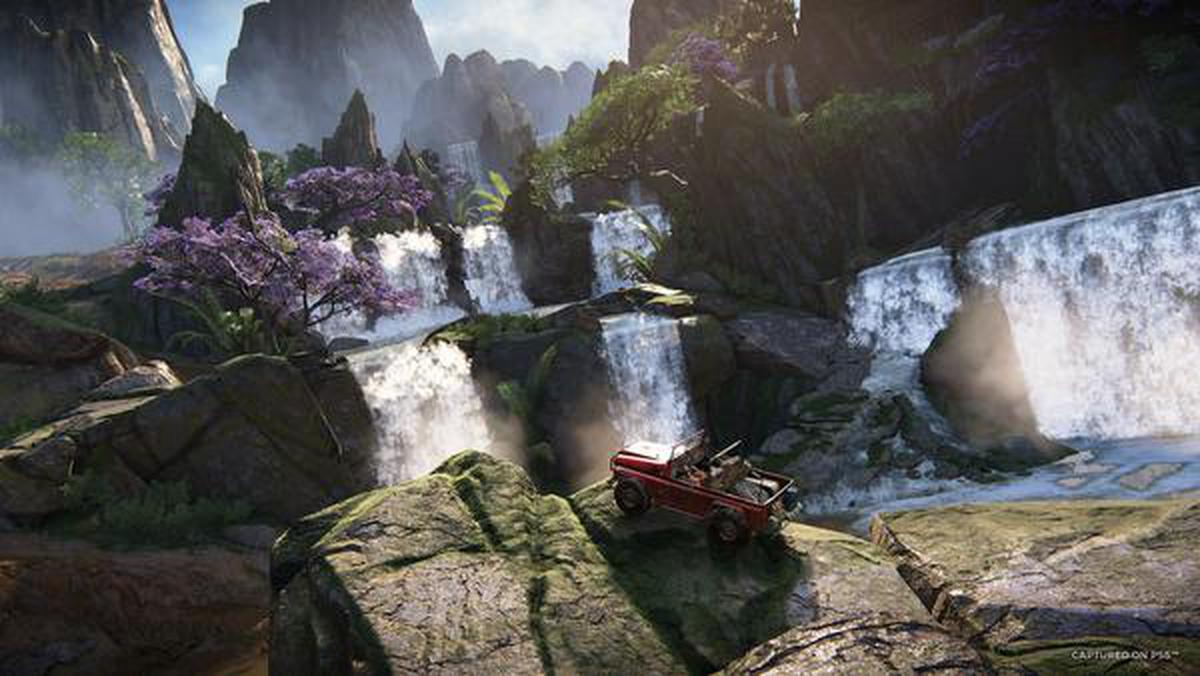 Still from ‘Uncharted: Legacy of Thieves Collection’ games, for the PlayStation 5. Available from January 28, 2022. The screenshot shows Chloe Frazer and Nadine Ross in a 4×4 in ‘Uncharted: The Lost Legacy’

With the remaster, the PS5 DualSense controller’s haptics mimic the tension and resistance you may feel when plowing your 4×4 vehicle across rivers or engaging in combat, giving you a sense of both control and immersive experience. The vibrations are satisfying and prove a helpful indicator on whether you are failing miserably or pushing through successfully. When it rains, the DualSense’s haptics mimic the pitter-patter of raindrops, too, which just feels oh-so-cool. Some adaptive triggers are freed up entirely when, for example, your gun has no ammo, leaving you with a sense of defeat.

Was I emotional playing these games? Absolutely. The world of Nathan Drake brims with intrigue and immersive gameplay to match.

That said, the timing of the Uncharted remasters is remarkable given the cinematic expansion of the comic books and games; actors Tom Holland, Mark Wahlberg and Sophia Ali are currently in production for their roles as Nathan Drake, Victor Sullivan and Chloe Frazer respectively. It will be exciting to see the Spider-Man: No Way Home star switch out skyscrapers for mountains.

The remaster of the Uncharted Legacy of Thieves collection is an ideal buy for those who want to experience a classic game in a new way, or even those entirely new to the franchise entirely. But is this Sony’s cheeky excuse to make you consider getting a PlayStation 5. Sure.