The governing council of UEFA, European football’s governing body, will meet on Friday to discuss the geopolitical crisis between Russia and Ukraine. The Champions League final is likely to be moved out of Russia. 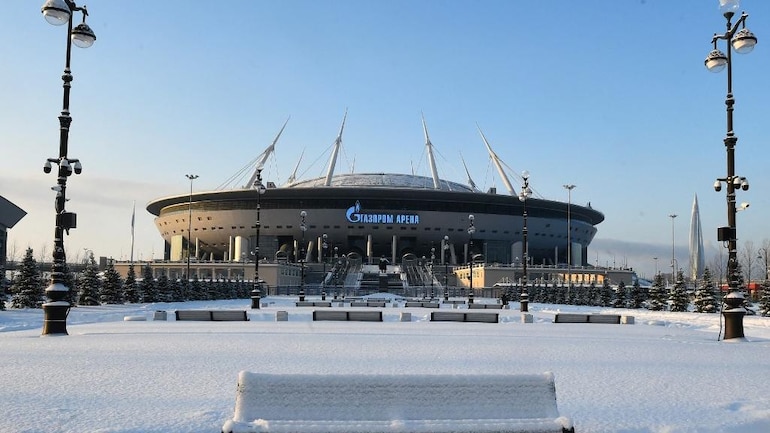 The UCL final is scheduled to be held in St Petersburg, where the stadium is sponsored by Russian state-owned energy giant Gazprom. (AFP Photo)

St Petersburg is all set to lose out on the hosting rights of the marquee football fixture, the Champions League final, after Russia’s invasion of Ukraine.

The executive committee of UEFA, the European football’s governing body, is all set to meet on Friday to discuss the geopolitical crisis. The UEFA is likely to take a call at the earliest, according to a report on the news agency Associated Press.

It is likely that the officials will confirm the decision to move the Champions League final, scheduled for May 28, out of Russia after the meeting, according to an AP source who spoke on conditions of anonymity.

The UEFA on Thursday confirmed there will be a meeting on Friday.

“Following the evolution of the situation between Russia and Ukraine in the last 24 hours, the UEFA president has decided to call an extraordinary meeting of the executive committee …. in order to evaluate the situation and take all necessary decisions,” UEFA said in a statement.

The British government and fan groups had been asking UEFA to no longer play the game in the St. Petersburg, where the stadium is sponsored by Russian state-owned energy giant Gazprom.

“On this tragic day, our thoughts are with everyone in Ukraine, our friends, colleagues, members, & their loved ones,” the Fans Supporters Europe group tweeted Thursday. “Given the events unfolding, we expect an imminent announcement from UEFA on the relocation of the Champions League final.”

The Ukrainian Premier League suspended operations on Thursday due to President Volodymyr Zelenskyy’s decision to impose martial law. The league has been on a two-month winter break and was due to resume on Friday. It did not give any planned date to restart.

The International Paralympic Committee said it was in talks with sports officials in Ukraine and Russia as their teams prepare to head to China for the start of the Paralympic Games next week.

Russia’s name, flag and anthem are already barred from the March 4-13 Paralympics in Beijing over previous doping disputes. Its team is due to compete as RPC, short for Russian Paralympic Committee.

Click here for IndiaToday.in’s complete coverage of the coronavirus pandemic.