Left-arm spinner Nasum Ahmed claimed a career-best 4/10 as Bangladesh beat Afghanistan by 61 runs in their first T20I on Thursday. 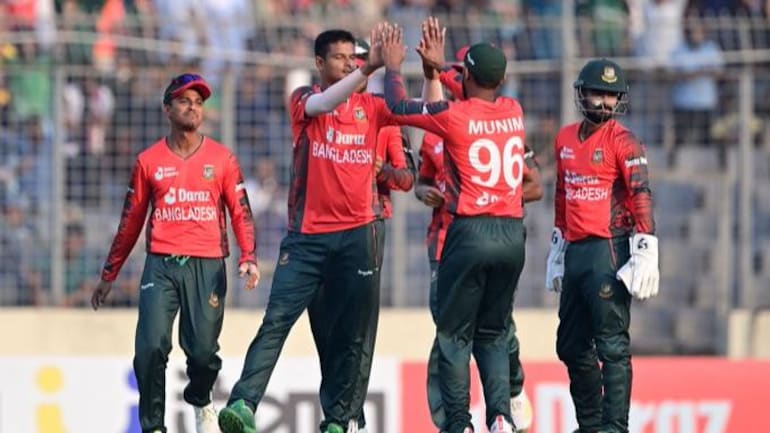 Bangladesh rode on left-arm spinner Nasum Ahmed’s career-best 4/12 to bowl out Afghanistan for 94 and seal a crushing win in the first match of a two-T20I series in Dhaka on Thursday (March 3).

Pacer Shoriful Islam grabbed 3/29 and left-arm spinner Shakib Al Hasan 2/18 to complement the effort of Nasum, who reduced Afghanistan to 20/4 in the fifth over.

Afghanistan failed to recover from the initial blow and eventually were dismissed for 94 in 17.4 overs in reply to Bangladesh’s 155/8.

Najibullah Zadran and Mohammad Nabi were attempting a comeback for Afghanistan with a stand of 37 until Nabi hold out for 16, giving allrounder Shakib his 400th white ball wicket.

In his next over, Shakib also dismissed Zadran, who top-scored for 27.

They beat Afghanistan by 61 runs in the first T20I to take a 1-0 series lead #BANvAFG pic.twitter.com/Ll8dBM25d1

Earlier, Liton Das struck a 44 ball-60 to get Bangladesh started. Afif Hossain scored 25 and debutant opener Munim Shahriar made 17 after they opted to bat first.

Opener Naim Sheikh continued his poor form to be out on 2, and Shahriar was dismissed by Rashid Khan to leave Bangladesh 25-2.

Liton and Afif dealt astutely with Afghanistan’s much-vaunted spin attack, comprised of Rashid, Mujeeb Ur Rahman and Nabi, and shared a 46-run partnership.

Liton reached his fifth fifty, pushing a Rashid delivery to long on for a single. However, after hitting four fours and two sixes, he was finally removed by Fazalhaq Farooqi.

Farooqi and Omarzai took two wickets each and prevented Bangladesh from hitting big in the death overs.

The second and last T20 is on Saturday.