CWC 2022: We both deserve it equally- Smriti Mandhana shares Player of the Match trophy with Harmanpreet Kaur

ICC Women’s World Cup 2022: Smriti Mandhana shared her ‘Player of the Award’ trophy with Harmanpreet Kaur after both starred in India’s record 155-run win over West Indies women in the group stage encounter. 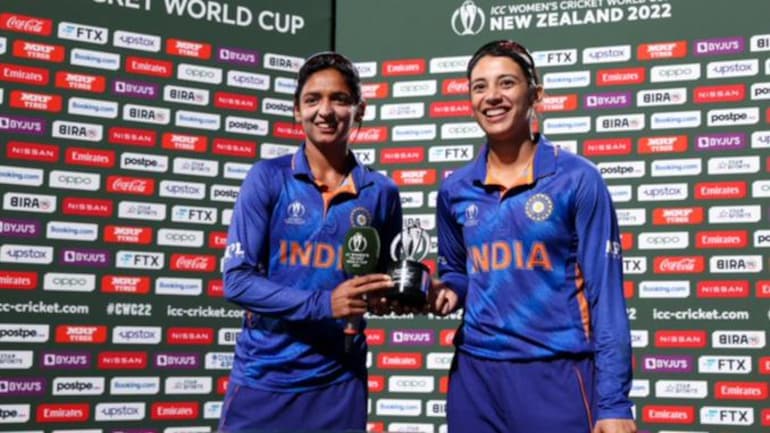 India women’s opener Smriti Mandhana showed exemplary sportsperson spirit and shared her ‘Player of the Award’ trophy with her vice-captain and fellow centurion Harmanpreet Kaur after helping her team register a record 155-run win over West Indies women in the group stage encounter of the ICC Women’s World Cup 2022 in Hamilton on Saturday.

Notably, Mandhana and Harmanpreet’s record 184-run stand took India to 317/8 before all-round bowling restricted the West Indies to 162 in reply. After thrashing West Indies women by a record margin of 155 runs, Mandhana came to the post-match presentation ceremony along with Harmanpreet in Hamilton.

As soon as the adjudicating team said Smriti was the player of the match, Mandhana walked up with Harmanpreet and said, “Well, I think scoring a century and not being the Player of the Match is something that I really wouldn’t want.”

“I think we both contributed equally for us to score 300. It’s good for us to share the trophy. Both of us are good enough contenders to get this (award). I believe ICC has enough budget to give both of us separate trophies (laughs)” Mandhana added.

While Mandhana smashed her fifth ODI hundred, a sensational 119 off 123 balls studded with 13 fours and two sixes, Kaur had 10 hits to the fence and two maximums in her 107-ball 109, which was her fourth ton and the first since hitting 171 not out against Australia in the 2017 World Cup.

The duo forged a 184-run stand for the fourth wicket, India’s highest partnership for any wicket at the women’s World Cup, to help the team post its highest total in the history of the showpiece event, a challenging 317 for eight after skipper Mithali Raj won the toss and elected to bat.

The 2017 edition finalists then returned to dismiss West Indies for 162 in 40.3 overs to keep themselves in contention for the knockout stage. India is now placed in the top four among eight teams after this win, behind Australia, New Zealand and South Africa in the overall standings.