Pink ball Test: India were nine wickets away from a 2-0 series victory with Sri Lanka reaching 28 for one at the close of play on day two, chasing an improbable target of 447 and with three days still remaining. 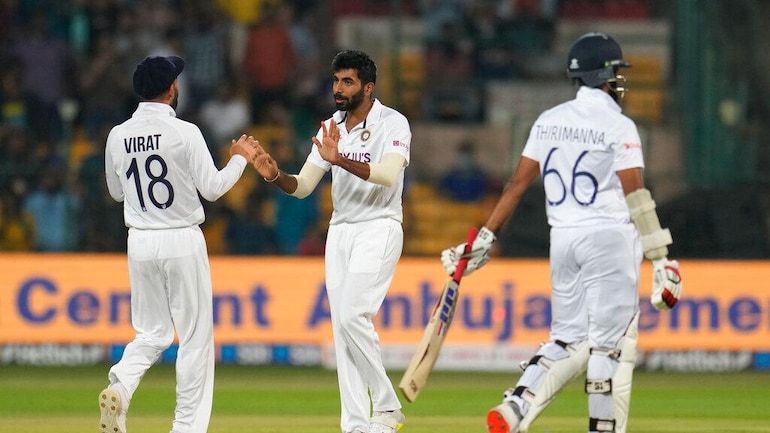 India pacer Jasprit Bumrah struck early blows to put the hosts on course for a series-clinching victory against Sri Lanka in the Pink-ball Test at the M.Chinnaswamy Stadium in Bengaluru on Sunday.

Chasing 447 for an improbable win, Sri Lanka were reduced to 28 for one at stumps on the second day of the Bengaluru Test against India on Sunday. Bumrah trapped Lahiru Thirimanne (0) in front of the stumps in the very first over but Kusal Mendis and Dimuth Karunaratne remained unbeaten in a 28-run stand for the second wicket.

This was after India set Sri Lanka a record target of 468 runs to win the Pink Ball Test in Bengaluru after declaring their second innings at 282/9 during the final session on Day 2. Shreyas Iyer top-scored for India with a knock of 67, while Rishabh Pant brought up the fastest Test fifty by an Indian off just 28 balls.

Sri Lankan spinner Praveen Jayawickrama picked up crucial wickets to dismantle India’s middle order and he finished with figures of 4/78, while Lasith Embuldeniya chipped in with three wickets.

Earlier, India lost Mayank Agarwal after a 42-run opening stand, but skipper Rohit Sharma and Hanuma Vihari kept the momentum going with the first 50-run partnership of the match. Sharma looked set to get to his first fifty as captain but it wasn’t to be as he fell on 46 after being caught by Angelo Mathews in the deep on the bowling of Dhananjaya. Soon after, Vihari was cleaned up by Jayawickrama, who returned after having had left the field earlier with a foot injury.

Rishabh Pant came in and unleashed fireworks straight away but watched Kohli depart from the other end. The former India captain was done in by a similar dismissal as the first innings where the ball kept low and struck him plumb in front.

However, Pant took the game away from the Lankans by going after the bowling as soon as he walked to the crease and the wicketkeeper quickly brought up his fifty with seven fours and two sixes. Made from 28 balls, his half-century was the fastest by an Indian batsman, breaking the record set by Kapil Dev 40 years ago.

Earlier, Sri Lanka had resumed on 86/6 but their resistance lasted only 27 minutes as Jasprit Bumrah (5/24) and Ravichandran Ashwin (2/30) cleaned up the tail to give the hosts a 143-run advantage before the second innings.

Bumrah’s fiery spells gave him his eighth five-wicket haul but his first on home soil on a pitch that is heavily favouring the spinners.