“Ugly Looking Girls Can Be Married Off By Dowry”: Says Indian College Textbook

The dowry system in India has been rampant and has caused a lot of crimes against women. It has always been a significant reason behind the injustice and inequality that is faced by women every day. Under the Dowry Prohibition Act, taking or giving dowry is a crime and illegal.

An image of a page from a college’s sociology textbook has gone viral which states the merits of the dowry system. The book is named “Textbook of Sociology for Nurses” written by T.K. Indrani. The author has given several pointers on the advantages of the dowry system which is banned in India. 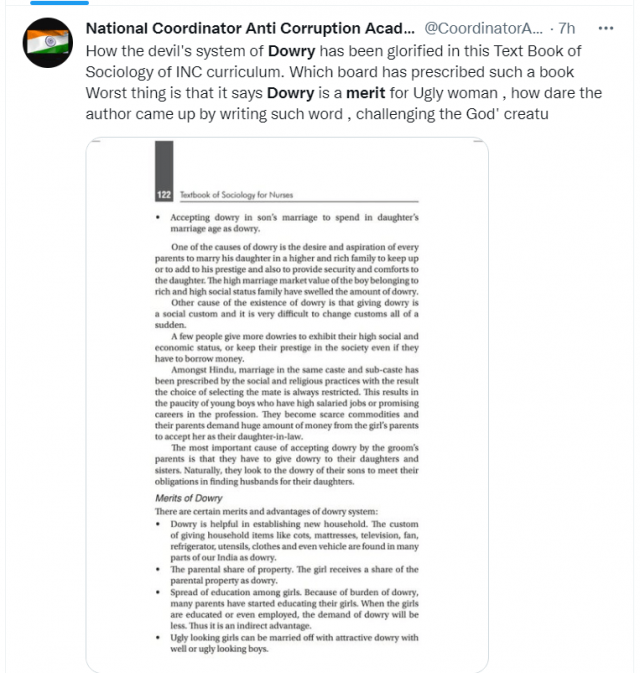 It went viral on Twitter when a user clicked the picture of the page and tweeted it across. The merits included that dowry helps in establishing new households. In the form of dowry, the girl receives a share of her parental property. It has also resulted in the spread of education among girls as when the girls are educated, the demand for the dowry is less.

Read Also: The Most Controversial Laws In The Indian Constitution

The most controversial yet surprising claim was that “ugly-looking girls can be married off with attractive dowry with well or ugly-looking boys”. This line is too intersectional in itself.

It clearly showcases the commodification of women that is done in our society. It is rightly pointed out that these ideas are highly misogynist and regressive. And the irony is that the author of the book is a woman herself.

Reaction Of The public

The issue came into the limelight when the Shiv Sena Rajya Sabha MP Priyanka Chaturvedi wrote a letter to Union Education Minister Dharmendra Pradhan seeking action on the contents of a book.

In the letter, she has stated that “It is appalling how such derogatory and problematic texts remain in circulation. That a textbook elaborating the merits of dowry can actually exist in our curriculum is a shame for the nation and its Constitution.” 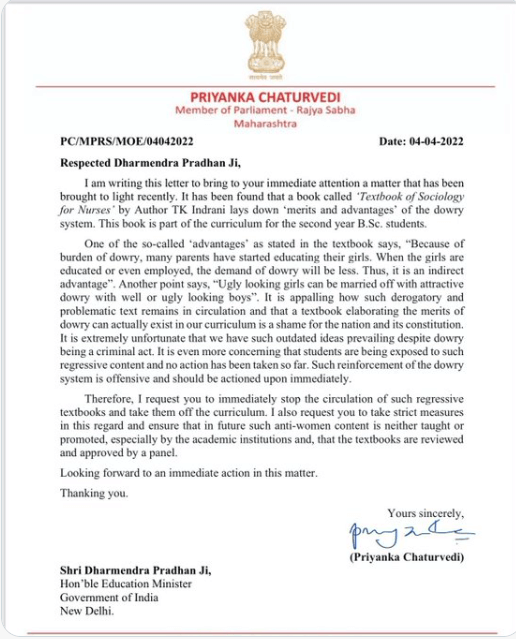 This point has faced a lot of anger and criticism from the public. People around are making viral posts on social media. Twitter is flooded with tweets seeking a response from the authorities. 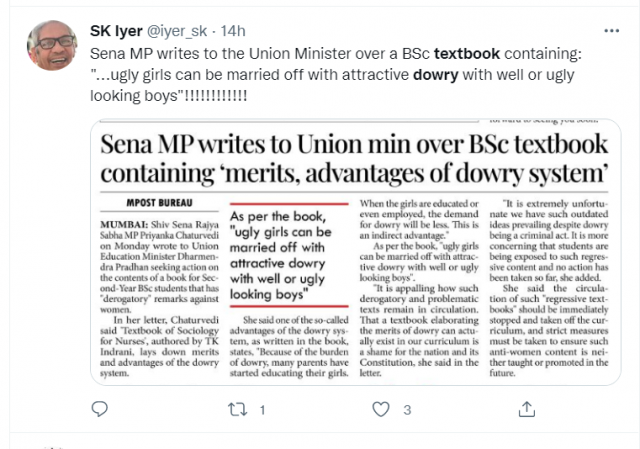 A crime being justified in an educational setting is something that is shocking yet saddening. It is the same as how rape is justified by people who blame the clothes of the girl. People are demanding an immediate ban on this textbook and are expecting firm action from the government.

Disclaimer: This article is fact-checked

Is The Indian Law Allowing Child Marriage And Dowry In The Hindsight?