Realme India is all set to launch the Realme 9 4G smartphone in the country tomorrow. The Chinese smartphone brand will announce prices for the handset at 12:30 pm IST. Apart from the Realme 9 4G, the brand will also be introducing a host of new products like the Realme GT 2 Pro and Realme Book Prime. It’s worth noting that it would be a 4G derivative of the Realme 9 5G, which was launched in the Indian market last month. Realme Pad Mini With 6,400mAh Battery Launched; Check Price & Other Details Here. 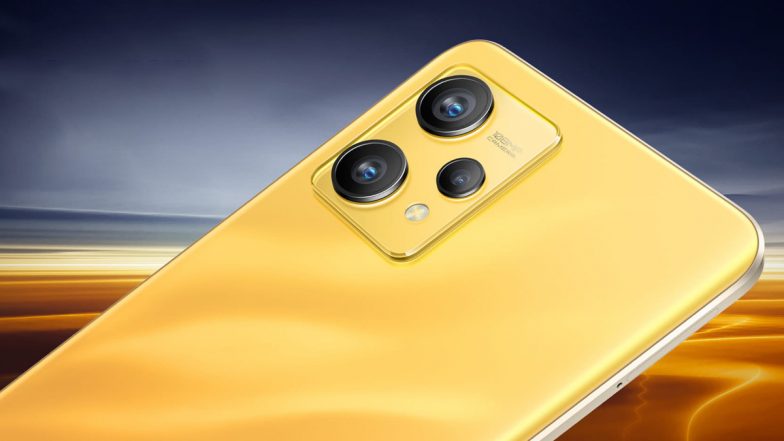 Ahead of its official launch, a few key details have been revealed thanks to a dedicated microsite that is live on the company’s website and Amazon India. The LTE version of the Realme 9 5G will get Samsung’s ISOCELL HM6 sensor with 108MP resolution and new pixel-binning technology. The company hasn’t revealed details of the other cameras. The microsite revealed that there will be an ultrawide cam with 120-degree FoV and a 4cm macro camera.

All you need is this to #CaptureTheSpark!

The #realme9 features a marvelous 108MP Camera, which helps you click pictures with unmatched precision and accuracy.

Launching at 12:30 PM, tomorrow, on our official channels.

The Realme 9 4G will sport a Super AMOLED display with a 90Hz refresh rate and 360Hz touch sampling rate and 1000 Nits peak brightness. It will also pack a Qualcomm Snapdragon 680 SoC and a massive 5000mAh battery. There will also be an in-display fingerprint heart rate monitor. Realme will offer the smartphone in three colour options – Sunburnt Gold, Stargaze White and Meteor Black. The handset will be 7.99 mm thick and just 178 grams in weight.

(The above story first appeared on LatestLY on Apr 06, 2022 10:32 PM IST. For more news and updates on politics, world, sports, entertainment and lifestyle, log on to our website latestly.com).