WhatsApp updates are nothing new. The platform keeps updating itself just like any other technological work, in order to keep running smoothly, making sure to incorporate new features, uses and more in order to ensure that its users keep being using the platform.

In recent news, WhatsApp is reportedly going to be coming out with around 11 new updates across the year of 2022 and there are certainly thoughts on many of them.

The messaging platform owned by Meta’s big feature though is going to be communities, that will allow several groups to be brought under one roof with the intent to share information all at once.

As per WhatsApp, “Organizations like schools, local clubs, and non-profit organizations now rely on WhatsApp to communicate securely and get things done – especially since the pandemic forced us all to find creative ways to work together while apart.”

They further said that “We think Communities will make it easier for a school principal to bring all the parents of the school together to share must-read updates and set up groups about specific classes, extracurricular activities, or volunteer needs.”

WhatsApp is touting ‘Communities’ as their big feature right now, what with it allowing a person to share information with several groups in one go.

Basically the Communities feature will allow a user to bring various groups under one roof. This is being said to be useful for work or school topics where teachers, principals and employers can easily share important information with separate groups in one go and also create smaller discussion groups for specific topics.

Admin delete option will now allow admins of a certain group control over deleting a message from everyone’s chat. Currently, only the sender can delete their message for everyone in a WhatsApp chat. But with feature, the Admin of a group will also have control over the messages sent on a group.

Kind of similar to how it is on Instagram and Twitter, now WhatsApp too will allow users to react to a message with emojis.

Earlier if one paused a voice message it instantly went back to the starting point, this new feature will allow users to pause and resume a voice message from that point itself.

Apparently, WhatsApp users will also eventually be able to do a fast playback on their voice messages, like at the 1.5x or 2x speed. 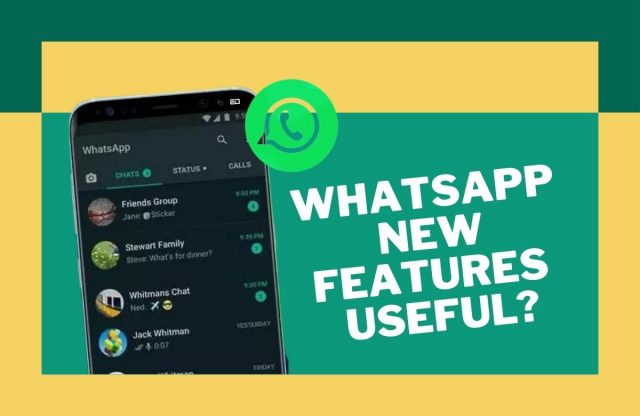 Perhaps the most useful and awaited feature of them all, where WhatsApp is finally increasing the file sharing limit on its platform. Currently users can only send files upto 100MB in one go, but with new update it is expected that the limit will increase to 2 GB or gigabytes.

WhatsApp is also expected to allow voice calls for up to 32 participants at one go with their new deisng.

Again quite a helpful update wherein users might be able to preview or listen to their voice recordings before sending them. Right now there is no such feature with users only able to record and send without being able to preview it once.

A waveform design just like the one for calls is also expected to be introduced for voice recorded messages.

10. Listen to Voice Messages Outside WhatsApp

As per reports it is also expected that one will be able to pause and resume voice messages will they are being recorded. Just like a normal voice recording.

As of now, it is not clear when each of these updates will be rolled out, but it is expected that they will eventually be rolled out over the course of the year.