Explained | Why is India concerned about WHO approach on excess deaths during the pandemic?

What are the findings by the WHO? How did they go about it? Why is the Indian government dismissive of the report?

What are the findings by the WHO? How did they go about it? Why is the Indian government dismissive of the report?

The story so far: Reports published in the website devex.com and The New York Timesindicate that the World Health Organization (WHO) was set to release an estimate of excess deaths during the pandemic period the world over and that the report had been delayed for months because of objections from the Indian government. The report is expected to show at least 4 million excess deaths in India, the highest such tally for any country in the world, according to the NYT. The Indian government responded to the report saying its basic objection to the report centred on the “methodology adopted for the same”.

What are excess deaths? How are they measured?

The excess deaths approach to calculating mortality considers the difference between the registered deaths before the pandemic and those during the pandemic period. This gives a robust estimate of the true impact of the pandemic — deaths due to the disease and those that occurred because of the pandemic overwhelming health systems among others.

In most developed countries, death registration is full or nearly full and therefore, calculating excess deaths is relatively easier as deaths data are reliable and readily available. In such countries, most deaths are medically certified with cause of mortality and therefore a clear picture on excess deaths with causality can emerge quickly. Countries such as the U.S., the U.K., Italy and Germany, for instance, have near 100% registration of deaths with the cause of mortality known in every case, enabling excess deaths to be known in near real time.

The corresponding figure for India is 92% (as per the Annual Report on Vital Statistics of India based on Civil Registration System-2019) and only 20.7% of the deaths are medically certified. There is substantial variation in registration and certification across States in India. Some States such as Tamil Nadu, Kerala, Karnataka, Gujarat, Maharashtra, West Bengal, Telangana, Andhra Pradesh, Haryana, Goa, Tripura, Odisha, Punjab, Mizoram and Sikkim have 100% registration, according to CRS-2019, while others such as Manipur (21.4%), Nagaland (30%), Arunachal Pradesh (38.6%), Bihar (51.6%), Jharkhand (58.8%), Uttar Pradesh (63.3%) and Jammu & Kashmir (66.7%) have much lower levels of registration.

Therefore, for countries like India, calculating excess deaths is not an easy task. The best way to do it is to individually calculate excess deaths for States with near 100% registration (based on a proper baseline for comparison) and to use suitable models to extrapolate deaths from limited data in others. News reports in The Hindu and others in 2021 managed to calculate excess deaths for 11 States and Union Territories, besides some cities as well. The Hindu’s Data Team estimated that the excess deaths in these 11 States and UTs were 5.8 times the reported COVID-19 death toll there till May 2021 (the end of the second wave of the pandemic). Some States such as Madhya Pradesh (24 times), Andhra Pradesh (18), West Bengal (11) had high excess deaths multiples, others such as Haryana (seven), Tamil Nadu (four), Maharashtra (four), Punjab (four) and Karnataka (four) had moderate multiples and some such as Kerala, Delhi (two) and Himachal Pradesh (two) had low multiples. (The baseline mortality for these States/UTs were taken as the average number of deaths in the corresponding months of the last two years (2018 and 2019) before the pandemic.)

What do studies based on these data and others say?

Later studies (both peer-reviewed and preprints) utilised these reports in The Hindu and elsewhere that used CRS data, besides other databases and surveys to infer that the reported death toll due to COVID-19 in India was undercounted and excess deaths were several multiples higher than the reported toll (see graphic below). 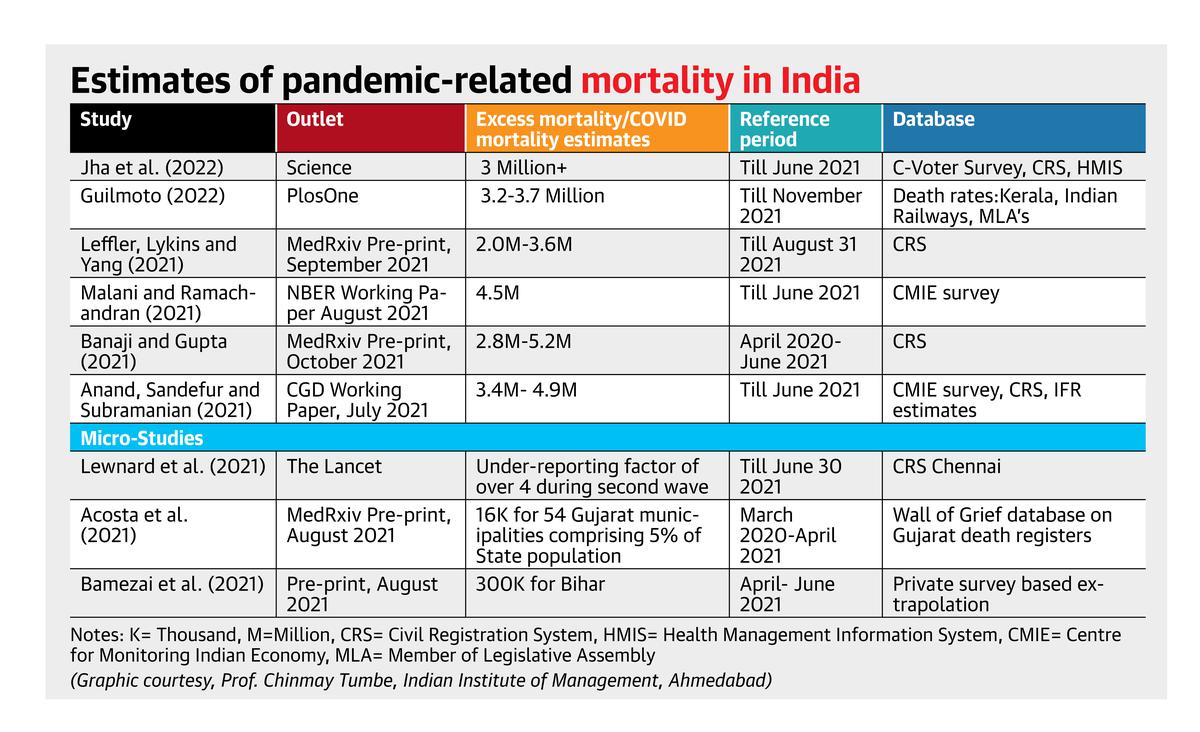 The peer reviewed paper in the Science magazine by Prabhat Jha and others used a national survey of 1.4 lakh adults to estimate that COVID-19 constituted 29% of deaths from June 2020-July 2021, corresponding to 32 lakh deaths, of which 27 lakh occurred in April-July 2021. This number was corroborated with two government data sources —one of which was the CRS and which showed all-cause mortality increased by 27% and 26% respectively, leading them to conclude that “India’s cumulative COVID-19 deaths were 6-7 times higher than reported official mortality with COVID and non-COVID deaths peaking similarly”.

The authors went on to address the possible overreporting of deaths in the national survey (conducted by CVOTER) by reaching out to “approximately 57,000 people in 13,500 households”, and this “showed similar temporal increases in mortality with COVID and non-COVID deaths peaking similarly”.

The fact that some States have gone to process a high number of compensation claims, several multiples over and above their reported death tolls suggest that their governments have acknowledged that these tolls reflect an undercounting of the actual death tally.

What are the findings by the WHO? How did they go about it?

The WHO has not released the final report as yet. But the report in The New York Times says that the excess deaths estimated by the WHO in India exceeded 4 million, nearly eight times the reported death toll of more than 5.2 lakh.

Explaining the methodology in an extract from the unreleased WHO report, the authors of the report (Victoria Knutson, Serge Aleshin-Guendel, Ariel Karlinsky, William Msemburi and Jon Wakefield) write that they based their estimates on all-cause mortality data from 17 States and one Union Territory in India. They used this approach — using data from subnational regions — in Argentina, China, Indonesia and Turkey as well, where national all-cause mortality data was not available. They go on to add, “for India, we use a variety of sources for the registered number of deaths at the State and Union Territory level. The information was either reported directly by the States through official reports and automatic vital registration, or by journalists who obtained death registration information through Right to Information requests”. They then estimate the total number of excess deaths for the country by looking at the variations in the subnational level and their contributions to the overall death toll before the pandemic and the data for these subregions during the pandemic.

Editorial | An honest reckoning: On simmering dispute between India and WHO about COVID deaths

Why is the Indian government dismissive of the report?

Reacting to the NYT report, the Ministry of Health and Family Welfare stated it was concerned as “to how the statistical model projects estimates for a country of geographical size and population of India also fits in with other countries which have [a] smaller population. Such one-size-fits-all approach and models which are true for smaller countries… may not be applicable to India”. It also said that “the model gives two highly different sets of excess mortality estimates… when using the data from Tier I countries and when using unverified data from 18 Indian States.”

The authors of the WHO report emphasise that “for India the global predictive covariate model is not used and so the estimates of excess mortality are based on data from India only”, thereby negating the argument from the Health Ministry that a “one-size-fits-all approach model” was used. Other concerns such as an assumption of “inverse relationship between monthly temperature and monthly average deaths”, besides lack of uniformity in “test positivity rate” expressed in the Ministry’s press release, do not seem to be borne out in the method as described by the authors in their extract from the WHO report. The Ministry also claims that the data published in the newspapers were “unverified”, though these were data that was accessed through various means, including Right to Information requests from the Civil Registration System for States for whom this data was available. The full report by the WHO should enable us to assess the pandemic’s true impact in India.

Demystifier: Why Is Apple Accusing Meta Of Taking Almost 50% Of Metaverse Purchases?

Sachin Tendulkar Birthday Special: 10 Memorable Quotes on the Master Blaster by Legends of the Game

Sachin Tendulkar Birthday Special: 10 Memorable Quotes on the Master Blaster by Legends of the Game