Eschewing the traditional peshkar, kaida, rela, madhyalaya, gat, tukra, padan, and chakradhar sequence, the senior artiste presented an extended Jhap taal — Peshkar and Punjabi Kaida — and Parasbandi Chautaal. Through a nuanced Chautaal, he exhibited how a taal cycle should be practised. “Two-three-four-one is how one should begin. Follow it sincerely,” he said. This was followed by the bandish, ‘Chalo hato piya’, in raag Sohini, set to Adha Ara Chautaal. It was rendered by Nagnath. Suresh Talwalkar’s vibrant bols seamlessly blended with Nagnath’s voice, with emphasis on lahora and mukhra aspects as notated by his guru. He concluded with a robust Chakradhar. Day Two featured Prof. Harvinder Singh’s concert. The Chandigarh-based musician, chose raag Bageshree. His employment of Kanada–ang (ga-ma-re-sa) could be brought to scrutiny. His presentation of ‘Sakhi man lage na’, a bandish in Vilambit Ektaal, was marked by clarity, followed by Drut Teentaal, and Tarana. He concluded with a Khambaj thumri. Mithilesh Jha and Rajendra Prasad Banerjee accompanied him on the tabla and harmonium respectively.

Sarodist Pt. Debashish Bhattacharya, of the Senia Shahjahanpur gharana, who performed next, presented the alap and jhor for Jhinjhoti, a melodious raag of Khamaj thaat, in Vilambit teen taal. He continued with raag Kalawati in Madhyalay Ektaal, and stationed with a Mishra Pilu tune. However, an unnecessary over-indulgence with the tanpura, for which he did apologise, marred the mood. Durjay Bhaumik held steady on the tabla. 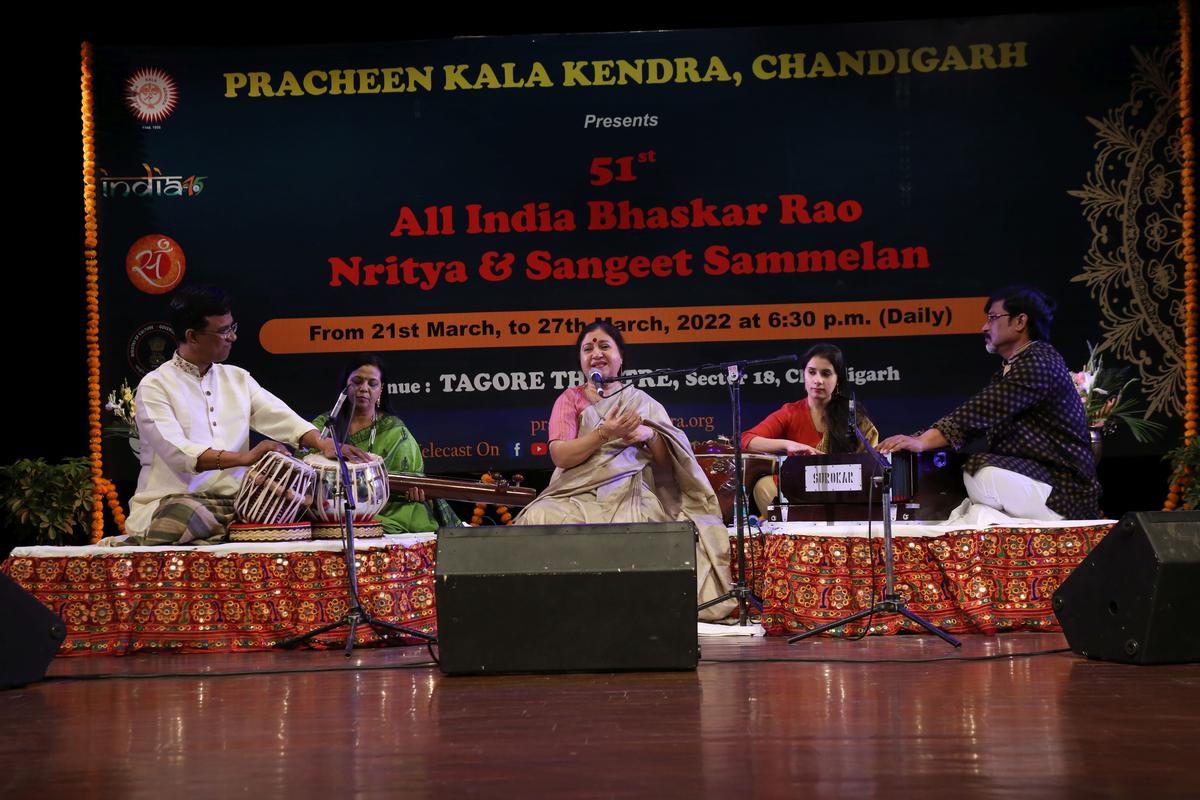 Tulika Ghosh, daughter of tabla exponent Pt. Nikhil Ghosh, and the great-niece of legendary flautist Pannalal Ghosh, combined the flavours of Atrauli, Gwalior, Sahaswan, Kirana, Patiala, and Benaras gharanas in her singing. Her first offering was raag Shri. After alaap, she presented a bandish in Jhaaptaal. In Maharaja Chakradhar Singh’s Raagmala, ‘Re re bahar aayi re chayanatbar’, the tempo changed while entering ‘Goure kul tilak manohar’, allowing the tabla accompanist, Durjay Bhaumik, to bring to the fore his skills. The Benarasi bhajan, ‘Banvari ki suratiya vistarit nahin’ was her final piece. 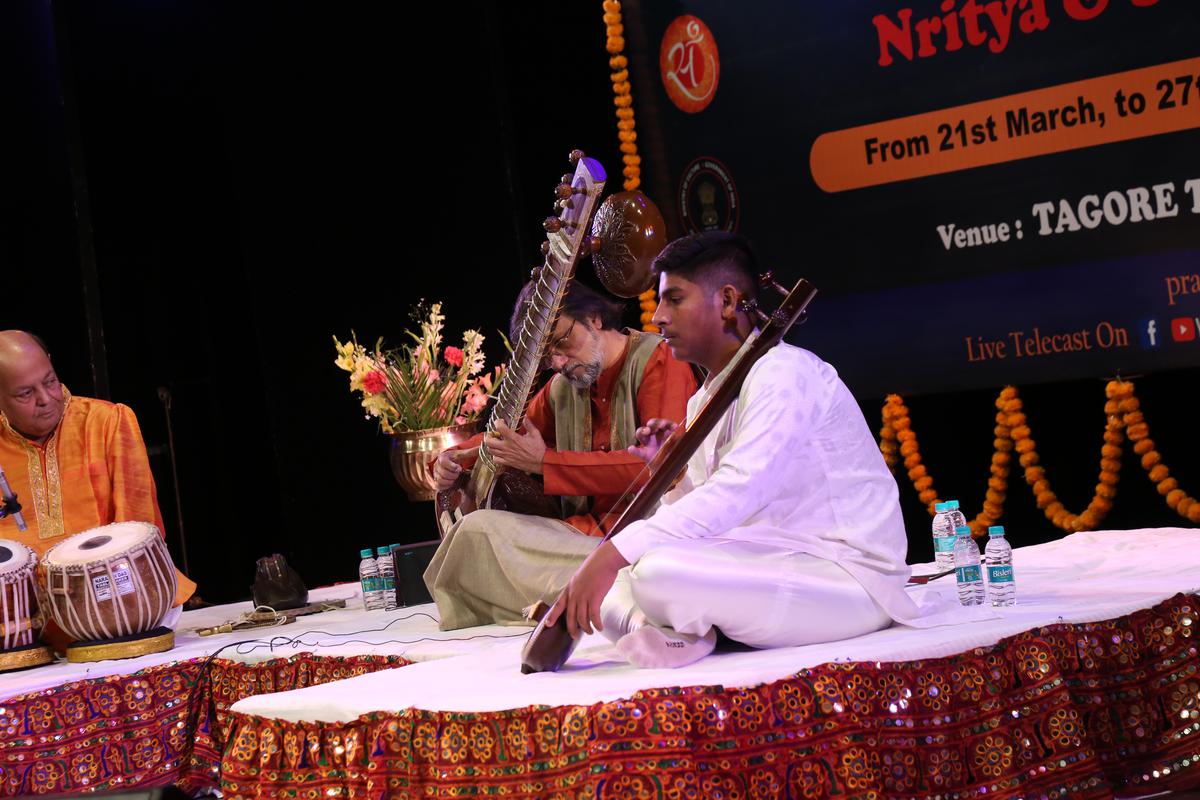 Sitarist Partha Bose, disciple of Pt. Manoj Shankar, of the Maihar gharana, chose to render raag Bihag, in three gats – Madhlay in khayal-ang, tantrakari, and löngi in drut, for his evening concert. Partha Bose’s attempt to import Etawah-Imdadkhani ang jor-jhala to embellish his rendition failed due to lack of proper application. He, perhaps, could have stuck to his known turf. He wound up with a pleasant Kafi thumri with Desi Todi inflections.

Shudh Kalyan, set to Vilambit Ektaal and Drut Teentaal, was Sanjeev Abhyankar’s choice to commence his evening concert on the fifth day. He journeyed through raag Kalawati, and tarana and hori in Mishra Tilang. However, his elaborate explanations became tedious after a point. Sanjiv rounded off his concert with a Mira bhajan. Well-known flautist Pravin Godkhindi performed with son Shadaj. They presented raag Jog (gayaki ang) in Madhyalay Rupak taal. The father-son duo progressed to drut taankari and layakari, felicitously harnessing the Åar bansuri, while concluding their concert with Ustad Amjad Ali Khan’s tarana in Mishra Pahari. It was a soothing rendition as Pravin played the notes also in E, like the Åar, but one octave lower, strung with A, B, E notes in the fifth octave, thus making for a delightful experience.

He commenced the penultimate day, with raag Hansadhvani (alap, jod, jhala, madhyalaya teentaal), culminating in the customary Mishra Pahari tune. Attention to evocation alongside craft would have enhanced the appeal. A well-known representative of the Punjab gharana, Yogesh Samsi, disciple of Ustad Allah Rakha, set the tone for a vibrant concert with his presentation of teentaal – peshkar, kaida, rela, padan, tukra, etc. , Tanmoy Deocha accompanied him on the harmonium. Within the truncated time, Yogesh enhanced his presentation with his deft touch and technique, on bayan and dayan. 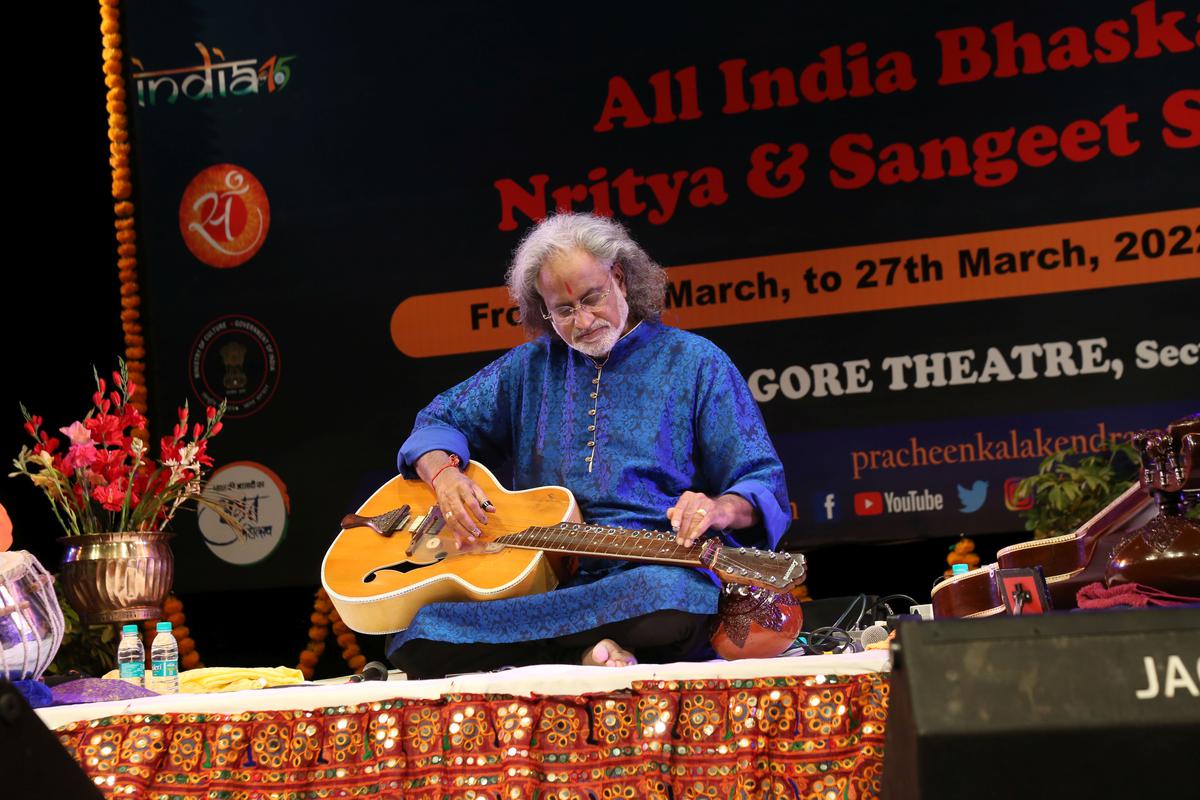 Dedicating the day to the memory of guru M.L. Koser, founder, Pracheen Kala Kendra, Pt. Vishwa Mohan Bhatt chose to present raag Vishwaranjani (an amalgamation of Shiva Ranjani and Madhubanti), his own creation, which bore shades of Pilu and Kirwani, and a touch of Malgunji, before including his son, Salil Bhatt for an incongruous and inadequate Jog-Jazz.

The Mumbai-based reviewer writes on art and culture.