Chicken, an important non-vegetarian protein, seems to have flown off the plate of the common man, following the sudden spike in price. Egg, too, is showing an upward price trend, after a substantial drop recently.

The price of broiler chicken has, in fact, been on the rise for some time, due to which demand has dropped in recent times. At one point, it crossed the ₹300 mark per kilogram, making the much sought-after non-vegetarian food scarce from platters.

Though the price had dropped a little to ₹284 per kg for skinless chicken on Tuesday, it is still way higher than the earlier price of ₹220-230 per kg. Dressed chicken with skin hovered around ₹250 per kg, while retail live bird was available at ₹172 per kg. Price obtained by the farmer was only ₹150 per kg.

On the other hand, egg prices, which fell down to ₹3.2 apiece till a week ago, have now reached ₹4.7 apiece, fluctuating wildly for reasons not readily decipherable.

Industry insiders attribute the chicken prices merely to seasonal variations, and assure that it will come down eventually. “It is an absolutely normal rise during summer, when chicks die due to heat. Usually, small farmers refrain from growing chicks during the two months as a precautionary measure, due to which the supply becomes scarce,” says P. Vidyasagar, a poultry farmer and businessman.

The gap between production and demand will remain till the freshly-hatched chicks grow to attain the saleable weight of 2.5 kg. 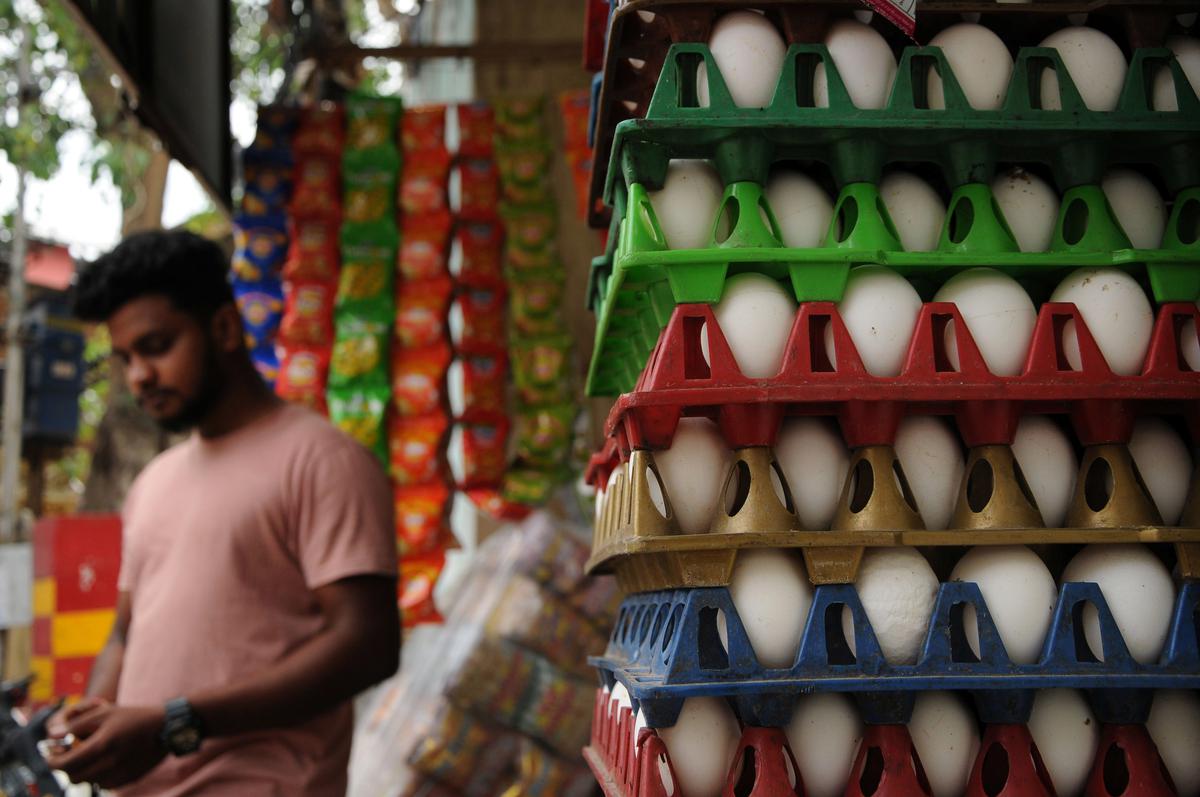 Eggs are priced at ₹4.7 apiece in Hyderabad, as compared to ₹3.2 apiece till a week ago.
| Photo Credit: RAMAKRISHNA G.

Vice-President of National Egg Coordination Committee K.V.S. Subbaraju, who has been a poultry farmer for the past 40 years, attributes the rise in egg and chicken rates to skyrocketing prices of feed. For the past one-and-a-half years, the cost of materials has been growing without a break for the poultry farmer, he adds.

“One kg of soyabean cake cost about ₹33-34 per kg at the end of 2020, which rose exponentially to ₹110 per kg in six months. The government had supplied maize at subsidised price of ₹1,400 per quintal a year ago, due to excess stock. Now, the same is available at ₹2,500-2,600 per quintal in the open market,” Mr.Subbaraju explains.

The production cost of broiler chicken is hovering at ₹130 per kilogram, and any price obtained lower than that is not viable for the farmer. This, coupled with heavy mortality rate during summer, is discouraging farmers from growing broiler chicks, he says.

Regarding eggs, he says the industry can survive only if the price is around ₹4-5 per egg. During the past three months, layer chicken (a special species of hens) have brought huge losses for the farmers due to plummeting price.

Though southern India, especially Telangana and Andhra Pradesh, is the hub of egg production, prices are mostly determined by the northern states, where the commodity has cold storage availability, says Mr.Vidyasagar. Hoarding by traders could be the reason behind the sudden rise in the price of eggs, he points out.

Samantha Ruth Prabhu Gives Us Major Fitness Goals As She Shares Glimpse of Her Intense Workout Session in Kashmir!

Samantha Ruth Prabhu Gives Us Major Fitness Goals As She Shares Glimpse of Her Intense Workout Session in Kashmir!