Demystifier: Is Monkeypox The Next Covid-19?

India increased surveillance for monkeypox infections at all international entry crossings on Friday, amid mounting worldwide concerns about an unprecedented epidemic that has resulted in around 100 cases suspected in areas of Europe, the United States, and Australia.

Since early May, health officials in North America and Europe have discovered hundreds of suspected or confirmed cases of monkeypox, raising fears that the disease, which is largely prevalent in areas of Africa, is spreading. 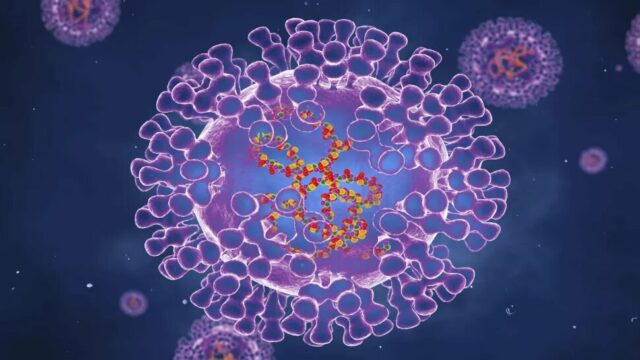 The Monkeypox virus (MPXV) is an enclosed double-stranded DNA virus belonging to the Orthopoxvirus genus in the family Poxviridae, which causes the infectious illness monkeypox. It is a virus that can affect humans as well as other animals.

Preaben von Magnus identified it as a pathogen of crab-eating macaque monkeys (Macaca fascicularis) employed as laboratory animals when two outbreaks of a smallpox-like disease occurred in colonies of monkeys housed for research.

Between 1970 and 1979, about 50 cases were reported, with Zaire accounting for nearly two-thirds of them. Liberia, Nigeria, Ivory Coast, and Sierra Leone were among the countries with cases. Over 400 human cases had been recorded by 1986. In tropical Central and West Africa, small viral outbreaks with a death rate of 10 percent and a secondary human-to-human infection rate of around the same amount are common. Contact with infected animals or their bodily fluids is assumed to be the main route of infection. In 2003, the first outbreak outside of Africa was recorded in the United States, in the Midwestern states of Illinois, Indiana, and Wisconsin, with one case in New Jersey.

An imported Gambian pouched rat infected a prairie dog, which caused the outbreak. There were no fatalities. 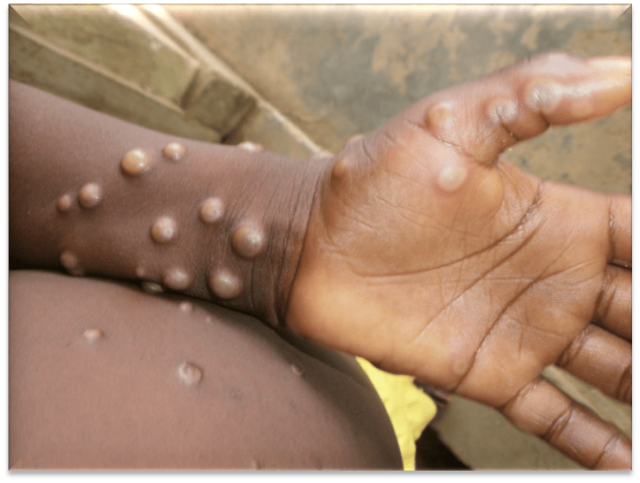 Fever, headaches, muscle pains, and exhaustion are the first signs. Swollen glands are present, unlike the more severe smallpox. Lesions often form on the face first, then spread to other regions of the body, within a few days or longer of the high temperature. They start off as small flat spots, then develop into small lumps that fill with clear fluid, then pus, and ultimately rupture and scab over. It has the appearance of a smallpox rash. Affected individuals may be sick for two to four weeks.

Infection transfer from person to person has been recorded in disease-endemic parts of Africa.

Direct contact with the blood, body fluids or cutaneous or mucosal lesions of infected animals can result in animal-to-human (zoonotic) transmission. Many animals in Africa have been reported to be infected with the monkeypox virus, including rope squirrels, tree squirrels, Gambian pouched rats, dormice, various monkey species, and others. Monkeypox’s natural reservoir has yet to be established, while rats are the most likely suspect. A possible risk factor is eating undercooked meat and other animal products from infected animals. People who live in or near forested regions may be exposed to infected animals in an indirect or low-level manner.

Also Read: Do We Need A COVID-19 Vaccine Every Year?

Close contact with respiratory secretions, skin sores of an infected person, or recently contaminated objects can result in human-to-human transmission. Droplet respiratory particle transmission typically necessitates lengthy face-to-face contact, putting health workers, household members, and other close contacts of active cases at danger. However, in recent years, the longest documented chain of transmission in a community has climbed from six to nine consecutive person-to-person infections. This could be related to a loss of immunity in all groups as a result of the end of smallpox vaccination. Transmission can also happen through the placenta (which can cause congenital monkeypox) or through intimate contact during and after birth. While intimate physical contact is a well-known risk factor for transmission, it is uncertain at this moment if it is the only risk factor.

While close physical contact is an established risk factor for transmission, it is currently unknown if monkeypox may be transferred sexually. To gain a better understanding of this risk, more research is required.

It is anticipated that smallpox vaccination will protect against human monkeypox infection because they are closely related viruses and the vaccine protects animals against experimental lethal monkeypox challenges. Because routine smallpox vaccination ceased after the disease was eradicated, this has not been shown clearly in people.

In Africa, the smallpox vaccine has been shown to minimize the risk of monkeypox in previously vaccinated people. The decline in poxvirus immunity in exposed populations contributes to the spread of monkeypox. It’s ascribed to declining cross-protective immunity among those who were inoculated before the end of bulk smallpox vaccinations in 1980, as well as an ever-increasing proportion of unvaccinated people. The US Centers for Disease Control and Prevention (CDC) recommends that anybody investigating monkeypox outbreaks or caring for afflicted people or animals get a smallpox immunization to protect themselves from the disease. Vaccination is also recommended for anyone who has had close or personal contact with monkeypox-infected individuals or animals.

Pre-exposure immunization is not recommended for unexposed veterinarians, veterinary workers, or animal control officials unless they are participating in field investigations, according to the CDC.

Can It Become A Pandemic?

Although the World Health Organization (WHO) has labeled the monkeypox outbreak as “atypical,” two top scientists have stated that it is not the next pandemic. It comes as Scotland’s chief medical officer has advised people to “take a breath and calm down” in the wake of monkeypox cases in England.

Professor David Heymann of the London School of Hygiene & Tropical Medicine, an expert in infectious disease epidemiology, believes it will not spread like coronavirus. “This will not be a pandemic as we know pandemics but it certainly is possible that this disease has spread in many different parts of the world already and we are just beginning to identify it,” he told the PA news agency.

“It is not transmitted by air, we don’t believe, so it’s not a respiratory infection like SARS-Coronavirus-2 (Covid-19), so it will not spread in the same manner,” he added. Further adding to this, WHO’s former assistant director-general for health security and environment, Prof Heymann said: “It is transmitted from people who have monkeypox to people who don’t have monkeypox by close physical contact with the sore or with the open sore that is causing the disease.”

Disclaimer: This article has been fact-checked

We do not hold any right, copyright over any of the images used, these have been taken from Google. In case of credits or removal, the owner may kindly mail us.

RESEARCHED: IS THERE A RELATIONSHIP BETWEEN COVID-19 AND HEART ATTACKS?